Celebrate your stay at a few of the most notable destinations across Exandria™ with our golden set of vintage hotel keychains! Rendezvous with someone special in Scanlan Shorthalt's Motel of Love in Tal’Dorei, indulge at the Lavish Chateau in Wildemount, or warm yourself at the Spire by Fire Inn located in ever-scenic Marquet.

Gave 1 to a fellow critter who is moving to horrible florida. Just to know they can use it to escape the turmoil there. While I just use mine to be cool!

The items are amazing they get shipped on time. I love everything. Just waiting to get paid again to but more

Really love these, they are just the right kind of heavy metal for my keys!

The only reason I give them four stars is because the Scanlan one came with the ring completely welded shut so you can't just slide keys on it you have to put an additional ring on it to use it. But otherwise super great!

Purchased these for keys that I will share with guests and family members who visit and not have to borrow a key, wanted something that would stand out and hopefully not get lost if accidentally dropped when I saw them one Laura's ad. They arrived quickly and was surprised at the quality, I did not read the description before adding them to the cart so was happy to find out these were metal and not plastic which adds good weight to them. The colors appear to be under a layer of epoxy which makes me believe that they will stay looking good for a while.

Look. I don't normally review products I buy from crit role shop or any online vendor, but when the website asked me to I thought I could air out some thoughts, because I never thought I would be writing a review for friggen keychains of all things.

You may be thinking to yourself, 30 bucks? For three key chains? Seems a bit pricey I know and honestly I wasn't going to buy it. I love critical role. I love Dungeons and Dragons. But never would I normally shell out 30 bucks for a key chain. Then as if a message from the Dawn Father itself, my keychain just popped off it's ring dropped two feet on to the floor and shattered into a million pieces.

So I bit the bait. I spent $30 of my hard earned cash that normally would go to a local delicious Asian street food, food truck whom I'm friends with the owner (and whose been on Guy Fieri Grocery games (hi Ronica, sorry I bought some keychains instead of your new dumplings. Also you were shafted in the All-stars run and should have won).

Like always the packaged arrived like 2 days later. I don't know how these wizards do it. Anyways they are so much better quality than I initially thought. **** that I am, for some reason thought would be getting a cheap metal set of keychains with my favorite tavern names on it. Instead I was gifted heavy **** gold rimmed, quality metal keychains with a beautiful layer of gloss over it! Also! A neat detail, 2/3 keychains reference what episode the settings initially came in! Except for Scanlans keychain because it's "niceeeee".

I swear if you chucked this at an interlopers head, the sheer weight of these would knock them out, quite possibly killing them with 2d8 bludgeoning damage. THESE KEYCHAINS ARE NO JOKE! I have dropped my keys twice since I have had them because I am clumsy and have so much social anxiety when I am in a parking lot that I fumble for keys (aka fergling them). Both times when they hit the floor, I swear there was a slight shake in the ground near my feet, and it crashes to the ground like a meteor. It's weird but it feels good dropping my keys with how quality and oddly heavy these are.

As a bonus, they are effin' beautiful key chains too! WHY AM I WRITING A REVIEW ABOUT EXPENSIVE KEYCHAINS? I hear your simple throbbing and quivering brain ask. Because I was genuinely surprised that I enjoy these keychains as much as I do. Honestly worth the price tag. Still weighing if it was worth not indulging on Ronica's vegetarian Rangoon's with ahi tuna bao buns for one night though (I mean, it's hard to beat that honestly).

Anyways the keychains are 10/10. Seriously never thought I'd write this review but here I am. 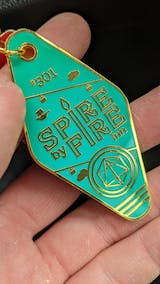